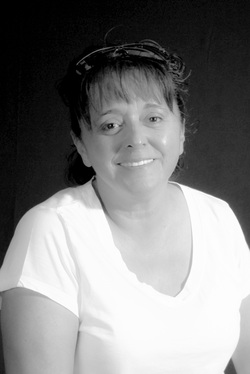 ﻿﻿﻿ Artist Statement﻿﻿
I was inspired by my Mi'kmaq elders growing up; watching the art that they created from materials gathered by Mother Nature. I strongly believe that all aboriginal people must nurture and preserve their own culture. My hope is that I can pass on the traditional skills I have learned to the next generation of my people. I feel that I am expressing my inner beliefs and values when I make my baskets. As I weave the ash, I am also weaving my dreams. ﻿

Sandra is from Elsiogtog First Nation which is located near Rexton, N.B. She comes from a large family of Mi’kmaq people who are fluent speakers of their traditional language. She has always been interested in crafts and drawing, but always admired basketry, bead work and quills. She has graduated from New Brunswick College of Craft and Design in the Aboriginal Visual Arts Program in 2014. After completing the AVA program a deeper understanding of the process was achieved and different perspective was gained. Her main focus is on ash basketry using natural materials and traditional techniques.

Sandra plans to open a Woven Dreams Basketry shop in Nova Scotia. She also plans to teach several Aboriginal crafts through a series of workshops, while continuing to learn new skills and methods herself. She continues to work in on variety of crafts such as dyed quills, birch bark, carving, beading and painting, at the same time she is expanding her lines of work into more functional basketry such as fishing creels, laundry baskets and hampers. She wishes to further the knowledge of the history of traditional crafts throughout the Atlantic Provinces and Maine, through teaching art Aboriginal communities. She has produced several examples of work from other tribes such as the Mailseet (headdress) and Passamaquoddy (berry basket) and hopes to gain more information on all of the tribes of the Wabenaki or Northeastern peoples.